WASHINGTON (Reuters) -President Joe Biden will enforce a mandate that workers at U.S. companies with at least 100 employees be vaccinated against COVID-19 or be tested weekly starting Jan. 4, spurring legal challenges from Republican governors who say Biden is overstepping his authority.

Governors from Iowa and Indiana vowed to fight the new rule, immediately, arguing it infringes on individual freedom. Other states such as Arkansas and Florida are expected to join later today.

Despite growing political opposition, the delayed roll-out of the mandate offered a reprieve to businesses facing labor shortages during the holiday season. Biden’s related decision to push back a deadline for federal contractors to the same date suggested the White House accommodated requests from companies and industry groups.

The administration also said millions of workers in healthcare facilities and nursing homes participating in the Medicare and Medicaid government healthcare programs will need to get their shots by the same date.

The action on the private-sector vaccinations was taken under the U.S. Occupational Safety and Health Administration’s (OSHA) emergency authority over workplace safety, officials said. The mandate applies to 84.2 million workers at 1.9 million private-sector employers. Another 18.5 million workers for those employers are exempt because they either work remotely or outside all the time, OSHA said.

“While I would have much preferred that requirements not become necessary, too many people remain unvaccinated for us to get out of this pandemic for good. So I instituted requirements – and they are working,” Biden said in a statement.

OSHA estimates that 31.7 million of covered workers are unvaccinated and 60% of employers will require vaccinations, up from 25% today, resulting in another 22.7 million employees getting vaccinated.

The administration’s various vaccine rules cover 100 million employees, about two-thirds of the U.S. workforce, the White House said. OSHA will consider during a 30-day public comment on the private-sector rule expanding the mandate to cover businesses with fewer than 100 workers, officials said.

The private-sector mandate is likely to trigger https://www.reuters.com/article/legal-us-health-coronavirus-usa-mandate/analysis-wide-array-of-opponents-prepare-to-fight-biden-vaccine-mandate-idUSKBN2HO2A9 a legal battle hinging upon the rarely used law on which the action was based and questions over the constitutional limits of federal power and authority over healthcare practices. The administration said the action falls well within OSHA’s authority.

The U.S. Chamber of Commerce, the nation’s largest business lobbying group, said the administration “made some significant adjustments” in the rule that reflect concerns raised by the business community.

Other industry groups voiced concerns. The Retail Industry Leaders Association said the 60-day implementation timeline is insufficient and that it wanted 90 days.

Associated Builders & Contractors, which represents construction workers, said it “plans to assess additional actions, which may include facilitating industry compliance and/or filing a legal challenge.”

Some of the nation’s largest unions such as the United Auto Workers (UAW) said they will review the rule to determine how it affects current workplace protocols.

The 490-page regulation https://public-inspection.federalregister.gov/2021-23643.pdf is known as an Emergency Temporary Standard (ETS). Senate Republicans said they would try to repeal it using a law known as the Congressional Review Act.

Indiana’s governor called it an “overreach of the government’s role” while Iowa’s governor accused Biden of taking “dangerous and unprecedented steps to insert the federal government even further into our lives.” Both threatened to sue and more states were expected to join.

“The administration wouldn’t move forward unless they thought that they could defend it legally. … I think the constitutional challenges are all going to fail,” Donald Verrilli, U.S. solicitor general during former President Barack Obama’s administration, told Reuters.

Biden in September unveiled plans for the mandate, seeking to increase vaccination rates amid a dangerous surge in COVID-19 cases and get more people back to work. In meetings with companies and industry groups representing retailers, logistics firms and construction workers, executives asked the administration to delay implementation until after the New Year, citing concerns about worker shortages during the important holiday season.

Employers will not be required to provide or pay for tests. The administration estimates that about 5% of employees covered by the rule will seek and receive religious or medical accommodations.

Officials estimate the ruling will lead to the vaccination of 2.4 million workers during the first year, and cost $1.4 billion, mostly paid for by the federal government.

Failure to comply with the mandate would trigger fines of about $14,000 per violation, which would increase with several violations, officials said. They did not specify whether workers would be fired for refusal to be vaccinated or tested.

A company can have all its workers unvaccinated under the rule as long as they get tested regularly and wear masks, officials said.

A minority of Americans has refused to be vaccinated. About 70% of U.S. adults have been fully vaccinated and 80% have received at least one shot, according to the latest data. An average of about 1,100 Americans are dying daily from COVID-19, most of them unvaccinated. COVID-19 has killed more than 745,000 Americans.

“We have to do what is right for our workforce,” Labor Secretary Marty Walsh told reporters.

The rule for healthcare workers covers more than 10 million people, of whom around 70% have already been vaccinated, officials said. It applies to around 76,000 healthcare providers that receive Medicare or Medicaid reimbursements including hospitals, nursing homes, dialysis centers, ambulatory surgical settings and home-health agencies. 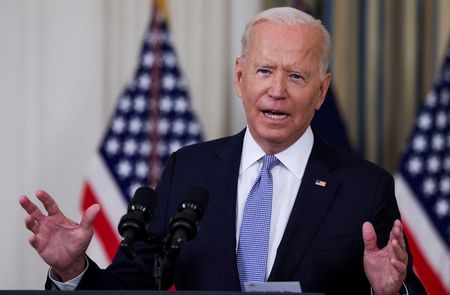