WASHINGTON (Reuters) -President Joe Biden and Republicans entered the weekend sharply at odds over how to craft an infrastructure deal that could satisfy their camps, imperiling the odds of a bipartisan deal.

Democrat Biden shot down a new proposal from the main Republican negotiator on infrastructure, Senator Shelley Moore Capito, that increased spending by about $50 billion over their last offer, the White House said.

Biden rejected the offer, saying it “did not meet his objectives to grow the economy, tackle the climate crisis, and create new jobs.”

Republicans had previously offered roughly $257 billion in new spending, short of the $2.25 trillion Biden initially offered and suggested he might bring down to as low as $1 trillion.

And while the two sides agreed to speak again on Monday, the White House also strongly signaled that they may seek a path forward with other Republican lawmakers or even with only Democrats.

“He indicated to Senator Capito that he would continue to engage a number of Senators in both parties in the hopes of achieving a more substantial package,” White House spokeswoman Jen Psaki said in a statement.

Up until now, Capito has been Biden’s primary negotiating partner. Monday’s conversation will be their third in a week.

Biden is eager to show that he made a good-faith effort at a bipartisan deal, sources said, but he risks creating division among Democrats, some who believe he is giving up too much to Republicans. Democrats hold narrow majorities in both the House of Representatives and Senate.

A Capito spokesperson offered scant detail of what was discussed on the call, saying that they “continued negotiating” and discussed both sides’ views.

Biden offered to drop his plan to raise corporate tax rates as high as 28% during an Oval Office meeting with Capito, sources said, replacing it with a minimum 15% tax rate aimed at ensuring all companies pay taxes.

Republican leaders see corporate tax hikes to finance the construction of roads, bridges, water pipes and other projects as a non-starter.

Biden could now choose to strike a deal including most of his wish list that might, at best, only secure the backing of his fellow Democrats.

But Biden’s one-on-one sessions between Biden and Capito are increasingly testing liberal Democrats’ patience by watering down their goals and delaying legislative action in the period before Congress goes into recess for summer vacation.

Senator Bernie Sanders, a liberal courted by the White House, said Republicans have passed massive tax cuts without bipartisan support and that he saw no reason Democrats couldn’t move forward in similar fashion.

“Please don’t tell me we can’t use the same tools to help working people,” Sanders wrote on Twitter.

A group of young activists from the Sunrise Movement, which wants to halt climate change and create jobs, gathered in front of the White House on Friday to protest what they called Biden’s broken promises and pandering to Republicans.

“We are demanding that he stops working with the GOP, that he meets with us instead and that he passes the biggest, most robust infrastructure package that he can,” said 24-year-old Ellen Sciales, one of the members of the Sunrise Movement that was consulted by Biden’s presidential campaign.

House lawmakers have already started work on a bill that may end up as a one-party effort. Biden called the Democratic leader of a congressional committee working on that bill, Peter DeFazio, to “to offer his support” for that initial work, Psaki said.

Transportation Secretary Pete Buttigieg had said the White House sees Monday – when Congress returns from a one-week break – as a critical date to see progress in talks.

“We’re going to keep a range of pathways open,” she told reporters. 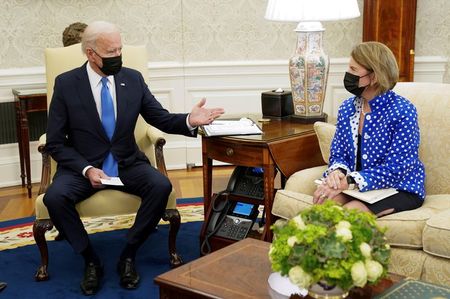 Neste and Shell to increase supply of sustainable aviation fuel

Chinese investment in the U.S. drops to lowest level since global financial crisis