WASHINGTON (Reuters) -U.S President Joe Biden said the Federal Reserve has a primary responsibility to control inflation and vowed not to seek “to influence its decisions inappropriately” ahead of a meeting with the central bank chief on Tuesday.

Biden said his “predecessor demeaned the Fed, and past presidents have sought to influence its decisions inappropriately during periods of elevated inflation. I won’t do this.”

He said he agreed with the Fed’s assessment “that fighting inflation is our top economic challenge right now.”

Biden added the U.S. government should “take every practical step to make things more affordable for families during this moment of economic uncertainty.”

Powell was formally sworn in last week to begin his second four-year term as head of the U.S. central bank.

The Fed is under pressure to decisively make a dent in an inflation rate that is running more than three times its 2% goal and has caused a jump in the cost of living for Americans. It faces a difficult task in dampening demand in the economy enough to curb inflation while not causing a recession.

There are already signs inflation has peaked. In the 12 months through April, the personal consumption expenditures (PCE) price index, the Fed’s preferred gauge of inflation, advanced 6.3% after jumping 6.6% in March, the Commerce Department reported on Friday.

(Reporting by David Shepardson in Washington and Rhea Binoy in Bengaluru; Editing by Tom Hogue and Lincoln Feast) 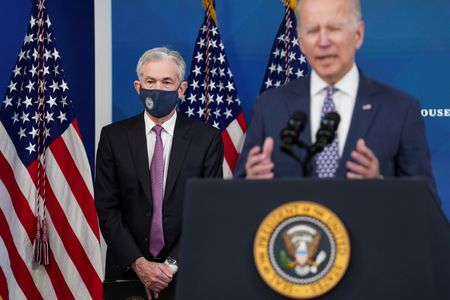 Toshiba to solicit proposals on strategic alternatives, including privatisation

U.S. SEC to Elon Musk: Regarding your tweets, a deal is a deal