By Jarrett Renshaw and Trevor Hunnicutt

REHOBOTH BEACH, Del. (Reuters) -Unemployment is down and wages are up, President Joe Biden said on Friday, as his administration touted data that left some economists concerned about the U.S. labor market.

“This is historic progress,” Biden said in a speech. “None of this success is an accident. It isn’t luck.”

Economists polled by Reuters predicted even stronger job growth of 650,000 jobs created in May, and say the factors keeping people from working may include a lack of childcare and generous unemployment checks. Employment is about 7.6 million jobs below its peak in February 2020.

Republicans are pushing to cut the unemployment checks, with half of U.S. states, all led by GOP governors, cutting off billions of dollars in unemployment benefits for residents.

“Biden and Democrats are holding back Americans from reentering the workforce and, therefore, holding back our economy,” said Ronna McDaniel, chairwoman of the Republican National Committee.

An extra $300 in unemployment benefits was a key part of Democrats’ stimulus plan enacted in March to help the United States survive the coronavirus recession.

Heather Boushey, a member of Biden’s Council of Economic Advisers, said the White House is not pressuring states to take the money because “labor markets are local.”

“We always knew that jobs would start to come back as soon as we wrapped our heads around the pandemic, and those added benefits – many of them expire in September,” she said. “So it’s just a couple more months now that people have access to them, and they provided a really important support for American families.”

(Reporting by Jarrett Renshaw in Rehoboth Beach and Trevor Hunnicutt in Washington; Editing by Chizu Nomiyama and Andrea Ricci) 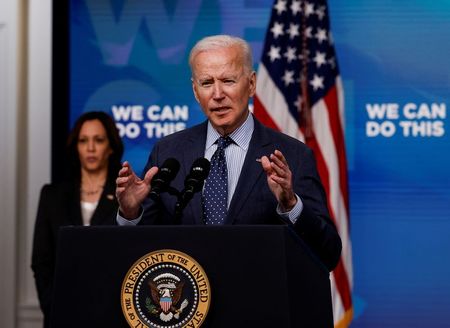 Marketmind: A heavy dose of caution

To buy or not to buy: Russian aluminium dilemma for Europe’s buyers