By Gleb Stolyarov and Laurence Frost

The tightening restrictions on Belarus came as its main ally Russia denied access to a second European carrier seeking to skirt Belarus en route to Moscow.

Belavia announced the cancellations “due to flight bans from a number of countries”, after neighbouring Poland joined a growing list of territories that have barred it from flying over them, making more routes unviable.

“We regret that our passengers have to face this situation for reasons beyond the airline’s control,” Belavia said as it scrapped flights to Amsterdam, Barcelona, Berlin, Brussels, Frankfurt, Hanover, Kaliningrad, Milan, Munich, Rome, Vienna and Warsaw until Oct. 30.

The European Union urged its airlines to avoid Belarus and moved to close its own airspace to Belarusian carriers amid outrage over Sunday’s interception of a Ryanair jet en route to Lithuania from Greece, and the arrest of a dissident journalist on board.

Belavia previously said it was banned from destinations in Britain, the Czech Republic, Finland, France, Latvia, Lithuania, Sweden and Ukraine, most of which have also barred it from their airspace. Its neighbour Poland joined the list on Wednesday.

Belavia flights were still crossing Italy and Hungary on Thursday and serving EU destinations including Larnaca in Cyprus and Tallinn in Estonia, according to FlightRadar24 data.

Fallout from the Belarus standoff has sharpened tensions with Russia, whose vast airspace is hard to avoid for flights between Europe and much of Asia.

But on Thursday Russia withheld clearance for an Austrian Airlines Vienna-Moscow flight plan avoiding Belarus – a day after failing to approve a revised Air France Paris-Moscow route. Both flights were cancelled.

“A change in flight routes must be approved by the authorities,” said a spokesman for Lufthansa-owned Austrian Airlines. “The Russian authorities did not give us this permit.”

Air France has cancelled a second Paris-Moscow flight scheduled for Friday after Russia failed to respond to another flight plan submission, the airline said.

France, which was among the first countries to bar Belavia, turned away its Barcelona-bound flight 2869 on Wednesday, forcing a return to Minsk.

“This is a European diplomatic issue at ministerial level,” a spokesman for the French DGAC civil aviation department said, declining further comment.

(Reporting by Gleb Stolyarov and Alexander Marrow in Moscow and Laurence Frost in Paris;Additional reporting by Alexander Cornwell in Dubai, Chris Steitz in Frankfurt and Michele Kambas in NicosiaEditing by Andrew Osborn, Pravin Char and Frances Kerry) 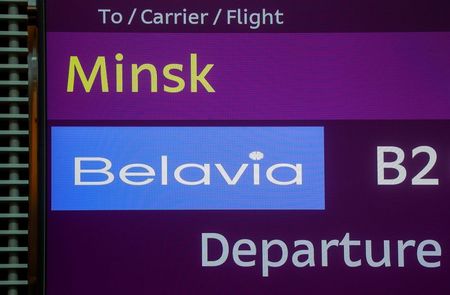