(Reuters) -Shares of Bed Bath & Beyond Inc jumped 15.22% on Wednesday as news of an accelerated share buyback plan and tie-up with Kroger Co reignited the interest of retail investors in the heavily shorted stock.

The home products maker was tethered to the meme stocks phenomenon this year, where individual investors coordinated in online message boards like Reddit and Stocktwits to fuel eye-popping rallies in certain shares, costing short sellers billions of dollars.

About 29% of Bed Bath & Beyond free float is shorted, according to financial analytics firm Ortex. The surge in the company’s shares amid high short interest makes it ripe for a “squeeze” where investors betting against the company are forced to unwind their exposure to stem losses.

Other retail darlings GameStop Corp and AMC Entertainment Holdings Inc added 5.48% and 5.15%, respectively, while Koss Corp and BlackBerry were up 2.49% and 2.89%, respectively.

Another highly shorted stock, Avis Budget Group Inc, slid 16.54% on Wednesday, a day after its shares doubled in value on strong results.

AMC, Workhorse Group Inc, Bed Bath & Beyond and Avis were among the most touted stocks on Stocktwits.

After a subdued October, the appetite of retail investors appears to be rising with most of their interest concentrated in technology stocks, analysts at Vanda Research said in a weekly note on Wednesday.

Bed Bath & Beyond on Tuesday announced it would speed up its $1 billion share buyback program, saying it would complete it by the end of 2021, two years ahead of schedule. The company also said it was partnering with Kroger to bring its line of home and baby products to the grocer’s website.

“The announcements should be received positively by investors, especially the share buyback, which we estimate has the potential to reduce the share count by 15% and boost 2022 EPS,” Telsey Advisory Group analysts said in a client note. 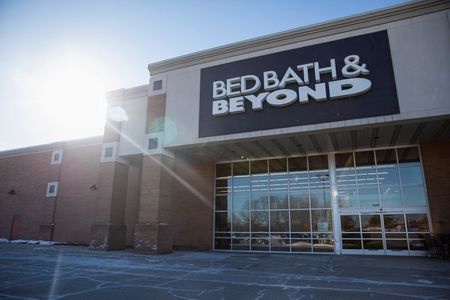 Senate panel to meet on Yellen nomination for Treasury on Friday

Exclusive-Investor Warburg cuts Ant valuation by 15% to below $200 billion...