TORONTO (Reuters) -The Bank of Canada could consider a larger rate increase than the half-point move it made last week, as the central bank grapples with reining in inflation which is at a 31-year high, Governor Tiff Macklem said on Thursday.

“I’m not going to rule anything out,” Macklem said, when asked if the central bank would consider increasing rates by more than 50 basis points (bps) in one go.

“We’re prepared to be as forceful as needed and I’m really going to let those words speak for themselves.”

Macklem, who spoke to reporters from Washington where he attended G20/IMF meetings, also said supply pressures that have driven up prices globally are showing no signs of easing.

The Bank of Canada last week raised its benchmark rate by half a percentage point, its biggest single hike in more than two decades, and opened the door to lifting interest rates above a neutral setting, which it estimates at between 2% and 3%, for the first time in 14 years.

Then, earlier this week, official data showed inflation surged to 6.7% in March, far ahead of analysts’ expectations.

That hot inflation coupled with Macklem comments prompted one Canadian to economist to revise up his call for the June 1 decision to 75 bps.

“Clearly, this is about getting towards neutral as fast as possible and then taking time to assess,” said Jimmy Jean, chief economist at Desjardin Group, in a note.

When deciding how high to raise interest rates, the central bank will be looking at the impact its tightening has on household spending and inflation, using annualized quarter-over-quarter inflation rates as an early signpost.

The central bank last week projected that annualized quarter-over-quarter inflation will fall from around 6% in the second quarter to about 2.5% in the fourth quarter. 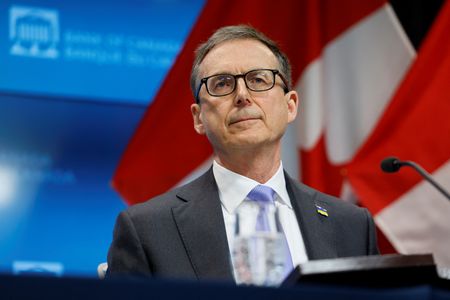 Disney path to subscriber success is outside U.S.; way to profit less clear

By William Schomberg and Andy Bruce ...