BENGALURU (Reuters) – Indonesia’s central bank will hold interest rates steady next week to bolster the economy as activity stalled by the recent devastating COVID-19 wave gradually gathers pace, according to a Reuters poll of economists.

Since the onset of the pandemic, Bank Indonesia (BI) has slashed its benchmark seven-day reverse repurchase rate by 150 basis points to a record low 3.50% and injected liquidity worth more than $57 billion.

All 29 economists expected the rate to remain steady at the conclusion of BI’s Oct. 18-19 policy meeting.

Median forecasts from the poll, conducted over the past week, predicted interest rates will stay at their current 3.50% until the third quarter of next year, increasing by 50 basis points in the last quarter of 2022 to 4.00%.

“As long as inflation remains weak and the currency remains broadly stable, then they are happy to keep monetary policy supportive to try and boost the recovery,” said Gareth Leather, senior Asia economist at Capital Economics.

The Indonesian rupiah has largely remained steady this year, down around 1% against a resurgent dollar. The recent rise in energy prices has also provided support as Indonesia is a major commodity exporter.

The central bank has remained cautious, hoping to avoid any backdraft from the U.S. Federal Reserve’s plans to taper its bond purchase program, likely starting next month. When the Fed last tapered in 2013, the rupiah depreciated more than 20%.

“In 2013, it was one of the fragile five currencies that got caught up in a big sell-off,” Leather said.

“There’s a whole bunch of differences (now) all suggesting Indonesia won’t get caught up as badly as it did then.”

Indeed, analysts say Indonesia’s economy is on more solid footing. The current account deficit is relatively narrow, with BI’s own estimate at 0.6% to 1.4% of GDP for 2021.

The trade surplus touched an all-time high in August at $4.7 billion but was expected to narrow to $3.8 billion in September.

Indonesia’s economy expanded at the fastest pace in 17 years in the second quarter this year, breaking a four-quarter streak of contraction as a result of the pandemic.

But building optimism around the recovery was clouded by an outbreak in July – one of the worst resurgences of COVID-19 in Asia – that compelled authorities to re-impose restrictions.

Southeast Asia’s largest economy was predicted to grow 3.2% in the quarter just ended and 4.6% in this one, according to the latest Reuters poll.

That is down from 4.7% and 4.8% expected in the last Reuters economic outlook poll taken in July, at the time of the outbreak.

The economy was expected to grow 3.4% this year and accelerate to 5.1% in 2022. Those forecasts were downgraded from earlier predictions of 4.3% and 5.2% respectively. Growth is forecast to remain steady at 5.1% in 2023, the poll showed.

“Consumption is expected to recover back slowly as restrictions are eased, notably in 4Q21,” noted economists at United Overseas Bank. “Investment, too, should recover at a faster pace, supported by rising FDI and recent government efforts to ease business licensing.”

(For other stories from the Reuters global economic poll) 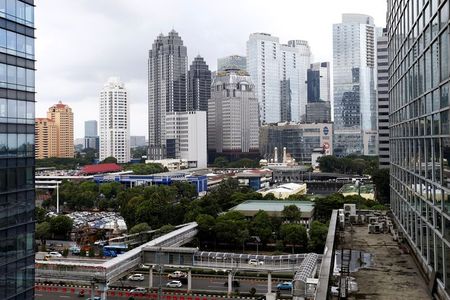 Rolls-Royce plans to raise up to £2.5 billion as COVID-19 bites

Marketmind: Some relief – but how long will it last?