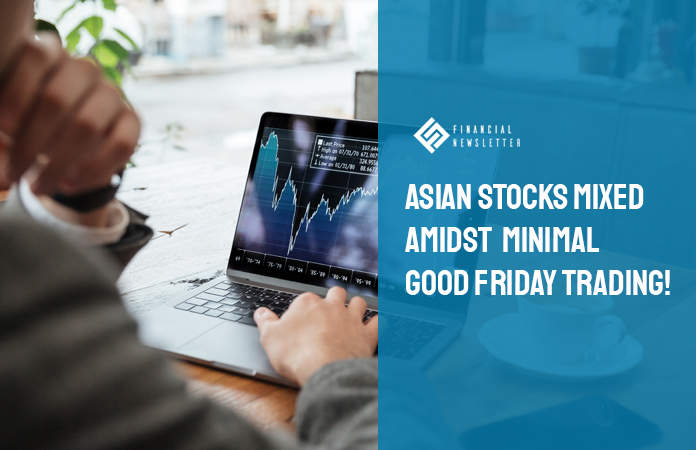 With the major global indexes and major markets in the Asia Pacific region remaining closed on Good Friday, Asian stocks were mixed on Friday with very thin trading. As the world looks upon the impact of Coronavirus on the global economy, the performance of the Chinese economy is being closely observed by analysts and experts to prepare for the future.

As the Shanghai Composite dropped by 1.04% to about 2,796.63 while the Shenzhen composite fell by 1.946% to approximately 1,721.22 and the Shenzhen component falling by l 1.57% to 10,298.41. Mainland Chinese shares hovered on the lower sides on the day. On the other hand, shares of Samsung Biologics surged by 16.82% after its announcement of Thursday that said that they had entered into an agreement with Vir Biotechnology for large scale manufacture of SARS-COV-2 antibodies for potential COVID-19 treatment. The deal has been valued at approximately $362 million, according to a press release from the two companies.

Chinese consumer inflation shows rising trends in March on a year-on-year basis. China’s consumer price index for March went up by 4.3% year-on-year, which is still less than the expected rate of 4.8%. The S&P 500 gained 1.5% to close at 2,789.82 and the Dow Jones Industrial Average went up by 285.80 points, or 1.2%, to end trading at 23,719.37. The Nasdaq Composite also closed higher by 0.8% at 8,153.58. U.S. stock markets were also closed on Friday for Good Friday.
The decreasing number of new cases in the Coronavirus epicenters globally is going to play a major role in boosting the market upwards. This week went all positive and rally for stocks and investors would hope to have more such weeks to follow. The reversal of the market from bearish to bullish is what has kept investors and traders enthusiastic at this time.

Currency look
The U.S. dollar index fell from earlier figures of the trading week of 100.5 to 99.424 while the Japanese Yen traded at 108.36 per dollar moving from the 108.8 figure of yesterday.

While the Dow and S&P500 made some of the biggest weekly gains, the recovery of the global economy amidst this pandemic outbreak is still a matter of substantial time.

US Dollar – The only winner amidst all the losers?