LONDON (Reuters) -The U.S. baby formula crisis has boosted profits at Britain’s Reckitt Benckiser and helped it grab the top spot in a $5.8 billion-a-year market. The challenge now will be to stay there.

With the business reportedly up for sale, there’s even more at stake.

Reckitt has ramped up production of its Enfamil formula since U.S. rival Abbott Laboratories in February recalled dozens of products in the United States after customers complained of infants contracting bacterial infections.

The British consumer goods company, which boosted formula production by 30%, told Reuters last week it now accounted for more than 50% of total baby formula supply in United States, up from around a third before the crisis.

Parents tend not to switch brands their infants like. A Reckitt spokesperson said the company was hoping to hold on to customers it has gained while Abbott products, such as Similac, are off the shelves.

The company said this week it was feeding 211,000 more babies than before the recall.

The stakes are high. Reckitt has reportedly long been looking to sell the formula business to focus on its higher margin household and consumer brands that range from Dettol disinfectants to Durex condoms. The Wall Street Journal said on Friday it was making a renewed sale attempt, and could fetch around $7 billion.

But the boost from the U.S. crisis may not last long.

The U.S. Food and Drug Administration (FDA) said on May 19 Abbott was on track to reopen its key baby formula plant in Michigan within one or two weeks, although FDA Commissioner Robert Califf told lawmakers a week later it would take until July before store shelves across the country were filled.

While Abbott’s recall has presented an opportunity for other firms, such as Gerber maker Nestle and Neocate maker Danone, it is Reckitt that is benefitting most, as it was already No.2 to Abbott before the crisis.

On April 1, Barclays raised its 2022 organic sales forecast for Reckitt to 4.4% from 4.0%, including an uplift to 7.4% from 5.0% at its nutrition division, which includes baby formula.

Less than five weeks later, it hiked its forecasts again to 6.0% for the group and 12.4% for the nutrition division.

According to Refinitiv, analysts have on average raised their full-year earnings forecast for Reckitt by 4.35% in the past 30 days, to about 311 pence per share.

“Near term, the biggest financial impact is going to be on Reckitt,” said Barclays analyst Iain Simpson. “The big question is how much of the recent market share gains Reckitt holds on to once Abbott is back on shelf.”

On its own, the sales hike would result in increased profits. But margins have been further boosted by the United States saying it will temporarily cover the cost of baby formula for low-income families dependent on government discounts in states contracted with Nestle and Reckitt.

Companies normally bid for state contracts to be the sole provider of baby formula for low-income families under the Women, Infants and Children (WIC) programme. In their bids, they offer a “rebate”, in the form of discounts, to the states.

“Financially, it’s great both for the top-line and profitability because they don’t need to give a rebate to the state government for selling formula,” Bernstein analyst Bruno Monteyne said. “It probably will add at least 20-30 basis points of higher margins for as long as this lasts.”

Barclays’ Simpson agreed not being bound by a WIC contract would be a boost, estimating they have a 5% EBIT (earnings before interest and tax) margin versus about 40-45% for non-WIC contracts.

But some analysts say this boost is likely to be temporary, and Reckitt may not be able to keep its new customers.

While Bernstein’s Monteyne said there was “some truth” to the idea Reckitt could benefit longer-term from the damage to Abbott’s reputation, he noted the U.S. firm overcame a similar backlash from a 2010 formula recall within just a year.

“There is decent precedent,” he said.

“The U.S. is looking for other sources already to fill demand,” said Waverton fund manager Tineke Frikkee said. “Over time Abbott will get their formula back on the shelves and Reckitt will revert to normal market share.” 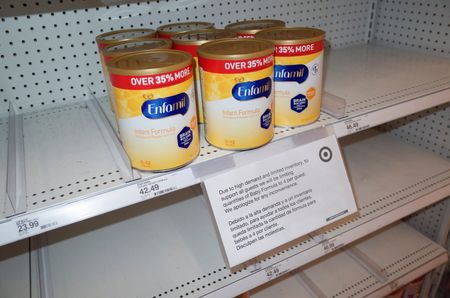 Marketmind: This is what it sounds like when doves cry

Oil slips, but gains 5% in the week on Kazakh, Libyan concerns

Crude settles up more than 7% as EU mulls Russian oil...