By Benjamin Mejias and Marco Aquino

LIMA (Reuters) – Peru’s sol currency, which plunged last year due to political risk, is bouncing back so far in 2022 and likely to keep strengthening, analysts and traders said, as interest rates rise and copper prices soar.

The currency has risen more than 2% against the dollar this month, hitting its strongest level since outsider leftist Pedro Castillo become president of the world’s no. 2 copper producer last July.

The sol hit a record low against the dollar last year and ended down over 10%, one of Latin America’s worst performers.

Now, despite the ongoing risk of potential political disruptions, its outlook has turned rosier on a recent series of interest rate hikes, a weaker dollar, strong commodities prices and a better outlook for government tax incomes.

“A structural factor is that there is a lot of dollar inflow from exports,” said Hugo Perea, chief Peru economist for BBVA Research. “Monetary policy also looks to be moving rapidly towards levels of neutrality.”

Peru has hiked its interest rate for six consecutive months, lifting it to 3% last week in a cycle that is expected to continue as the central bank seeks to rein in inflation. Higher rates encourage investment and savings.

“I think the main factor that would help the exchange rate is if the benchmark interest rate continues to rise,” said Asvim Asencios, a currency trader at Renta4 SAB Peru.

Of six analysts and traders Reuters spoke to, four projected that the sol, now at a seven-month high of 3.9 per dollar, would strengthen this year to as high as 3.8 per dollar. One said it would weaken to 4.15 per dollar. The sixth was on the fence.

Castillo, a relative moderate within a more radical Marxist party, is battling a fragmented Congress, ongoing protests in the mining sector and an official investigation into alleged corruption and influence peddling.

“This year we have regional elections and we could see more radical groups begin to take over the political map of Peru. This would affect the sol,” said Perea, adding: “Institutional checks for now are containing populist or radical outbursts”.

“We saw mining companies selling (dollars) practically until the last day of last year in a context where the exchange rate looked attractive,” said a currency trader at a local bank.

The sol hit an all-time low of 4.138 against the dollar in October.

Its rise started in December when local corporate demand for dollars began to ebb, allowing the central bank to reduce intervention in the market.

“What we are seeing right now is a recomposition of portfolios,” said Eduardo Jiménez, head of the information systems at Lima-based consultancy Macroconsult.

“People are recognizing that with these fundamentals you cannot have an exchange rate of 4.0 soles per dollar.” 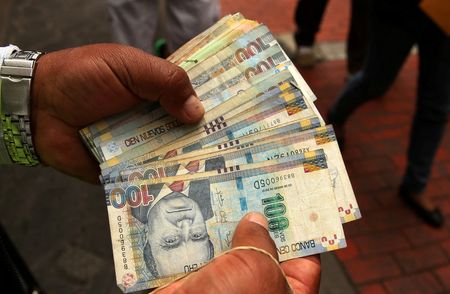 Handful of hedge funds bet big on GameStop before its wild...