NEW YORK (Reuters) – A potential renomination of Jerome Powell at the helm of the U.S. Federal Reserve would provide a needed sense of stability as the central bank prepares to pull back its emergency-level support, investors say, even while some chide the Fed chief for policies they say have pumped excessive liquidity into markets.

Wall Street is widely expecting that Powell, who was nominated for the role by President Donald Trump in 2017, will be renominated by President Joe Biden for another four-year stint. His current term, which runs out in February 2022, has proven positive for risk assets, with the S&P gaining 71% since his appointment on Feb. 5, 2018 and hitting a series of new records in part helped by emergency measures the Fed launched in response to the coronavirus pandemic.

Biden’s administration is actively discussing who should be Fed chair according to people familiar with the matter, although White House press secretary Jen Psaki declined on Tuesday to comment on the president’s timeline for making a decision.

“We have been quite impressed by his work so far” and “overall ability to communicate to the market,” said Anders Persson, chief investment officer of global fixed income at asset manager Nuveen, who said Biden would be well-served by renominating Powell due in part to the trust he has built up among investors while working under two presidents.

“The more clarity and stability we can get, that’s exactly what the market is looking for,” Persson said.

While the leadership of the U.S. central bank is always important to markets, Biden’s decision takes on heightened significance this year as the Federal Reserve has signaled that it will start tapering its $120 million in monthly bond purchases by the end of December. At the same time, the Fed is monitoring a historic surge of inflation as global supply chains remain disrupted by the coronavirus pandemic.

The uncertain economic impact of the wave of coronavirus cases from the Delta variant should make Biden’s decision to renominate Powell an easy one, said Jack Janasiewicz, portfolio strategist with Natixis Investment Managers Solutions.

“I don’t see how you give him anything but good reviews,” Janasiewicz said. “When you think about replacing Powell with someone else, that lack of continuity would spark concerns in the marketplace.”

Betting markets such as PredictIt give Powell an 89% chance of renomination, followed by an 8% chance for current Fed Governor Lael Brainard.

Venk Reddy, chief investment officer of Zeo Capital Advisors, said Powell had done a good job given that shortfalls on the fiscal policy side “required the Fed to act with monetary policy a bit more aggressive than (Powell) may have wanted.”

Reddy said that the Fed’s change to its average inflation policy last year was “really smart” and “gave them cover to be a bit more flexible with the levers.” The Fed in 2020 rolled out a new monetary policy strategy putting new weight on bolstering the U.S. labor market and less on worries about too-high inflation.

Senator Steve Daines, a Montana Republican and member of the Senate Banking Committee which will vote on Biden’s nominee, wrote an Aug 19 letter to Biden calling for Powell’s reappointment which noted that “changing the top leadership at this sensitive time could foster uncertainty.”

Still, some key Democrats on the panel have not yet endorsed Powell.

Not all investors are unreservedly positive about the Fed’s actions since the pandemic, with some notably concerned about inflation.

DoubleLine’s Jeffrey Gundlach has questioned the Fed for not taking more steps to combat what Powell has called “transitory” inflation. At the same time, prominent investors such as Mohamed El-Erian, chief economic advisor at Allianz, have said that the Federal Reserve’s continued bond purchases have flooded the system with liquidity. In a Washington Post opinion piece, El-Erian argued that ultra-loose policy could “inflict unnecessary damage on the economy in the next 12 months.”

Still, it is unlikely any candidate chosen by Biden would stage a dramatic pullback of the support the Fed is giving the economy.

Not all on Wall Street are convinced that Powell will be reappointed.

“I think the odds are closer to a coin flip, but not due to having done a poor job. I think he’s done a good job under difficult circumstances,” said Phil Orlando, chief equity market strategist at Federated Hermes.

Instead, Orlando expects that there is a good chance Biden replaces Powell as part of a series of progressive picks as he fills four positions that will soon be available at the seven-member Fed board.

“You have an opportunity for Joe Biden to remake the Fed in his image,” and focus more on financial regulation, he said.

Nobel prize-winning economist and longtime Democratic adviser Joseph Stiglitz told Reuters in an interview Biden should not renominate Powell but rather put in place someone more in tune with the president’s policy goals.

Markets will likely continue to gain should Biden nominate Brainard instead, but a decision to chose another candidate will likely spark short-term volatility due to fears of increased oversight of banks and other financial institutions, said Katie Nixon, chief investment officer at Northern Trust Wealth Management.

“We’ve been living under a soft regulatory touch and the chance of a tighter regulatory environment would certainly be negative” for equities, Nixon said. 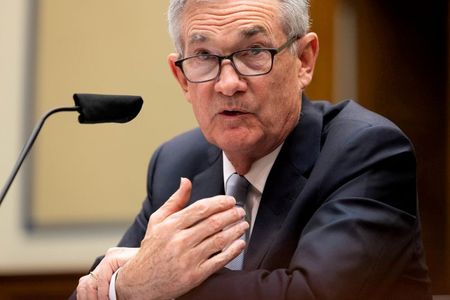 Britain’s Hotel Chocolat bolsters finances to get through coronavirus crisis