TOKYO (Reuters) – More entrenched inflation expectations, rather than a weak yen, will likely have greater sway over any future tweak in the Bank of Japan’s massive stimulus programme and dovish guidance, three sources familiar with its thinking say.

A divergence in monetary policy between the U.S. Federal Reserve, pushing for sizeable rate hikes, and Japan’s central bank that has kept interest rates ultra-low to support the economy, has nudged the yen down to a two-decade low near 130 to the dollar.

That has triggered verbal warnings from the finance minister and BOJ governor Haruhiko Kuroda over sharp currency moves they say could be more damaging to the economy than helpful for its exports.

Markets speculate the BOJ could adjust its current guidance to keep interest rates “at their present or lower levels,” to a more neutral one to stem further weakness in the yen.

While tweaks to the BOJ’s guidance cannot be ruled out, the central bank will likely not be in a rush to do so with the economy yet to recover to pre-pandemic levels, the sources said.

The BOJ also has no intention to use monetary policy tools to directly curb yen declines, a move that could be interpreted as currency manipulation and goes outside its remit, they said.

“Raising rates or signalling such action now will hurt the economy,” one of the sources said. “Yen moves are never direct targets of monetary policy,” another source said, a view echoed by the two other sources.

The BOJ will consider tweaking its dovish guidance only if the yen’s falls, coupled with other factors driving up prices, keep inflation permanently around its 2% target, they said.

“If inflation keeps rising and leads to a clear shift in long-term inflation expectations, there may be scope” for a tweak to the BOJ’s stimulus policy, a third source said.

The BOJ has pledged to maintain ultra-loose policy even as other central banks have started to tighten monetary settings, arguing that Japan’s sticky deflationary mindset will prevent prices from rising much soon.

Underscoring its resolve to keep rates ultra-low, the BOJ offered on Wednesday to buy an unlimited amount of 10-year government bonds at 0.25%, in its third move since February to defend its yield target.

Japan has seen consumer inflation accelerate only moderately after being mired in two decades of grinding deflation. Core annual consumer prices rose just 0.6% in February – well below the BOJ’s 2% target.

But there are signs short-term inflation expectations are climbing. The BOJ’s tankan quarterly survey for March showed firms expect inflation to hit 1.8% a year from now, the highest forecast on record, while an index gauging big manufacturers’ output prices rose to a 40-year high.

A separate survey showed the ratio of households expecting prices to rise a year from now hit a 14-year high.

Naomi Muguruma, a veteran BOJ watcher, predicted the central bank could make a slightly hawkish tilt to its policy guidance at its next meeting on April 27-28.

The BOJ is likely to raise this year’s price forecast next week, as rising fuel costs and the dissipating effect of past cellphone fee cuts are seen accelerating core consumer inflation to around 2% from April.

If and when the BOJ tweaks guidance will depend on how long inflation stays around 2%, and whether wages and consumption rebound strongly enough to put the economy on a sustainable recovery path, the sources said.

New quarterly projections, to be released at the April 27-28 policy meeting, will offer clues on how the central bank sees prospects of a pick-up in inflation expectations, analysts said. 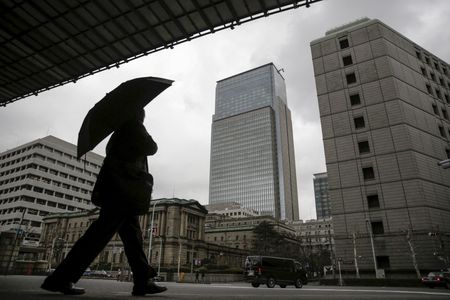