ANKARA (Reuters) – President Tayyip Erdogan’s belief that a shock interest rate cut will stoke up Turkey’s economy ahead of elections is instead likely to backfire as hot inflation and a lira selloff stall growth.

Sources close to the presidency told Reuters that Erdogan pushed the central bank for months – both publicly and privately – to deliver the monetary stimulus in order to boost lending, exports and jobs despite soaring inflation.

On Sept. 23, the bank delivered, unexpectedly lowering its policy rate https://tmsnrt.rs/3CJiJXv by 100 basis points to 18% – sending the lira currency to all-time lows.

Investors dumped Turkish bonds and said the move marked the latest blow https://www.reuters.com/business/turkish-central-bank-surprises-with-rate-cut-sought-by-erdogan-2021-09-23 to the central bank’s tattered credibility, given inflation had jumped above 19% amid global price pressures that leave emerging markets like Turkey uniquely vulnerable.

Consumer prices were up 19.6% in September from the same month last year, the biggest rate of increase in 2-1/2 years, data showed on Monday.

In interviews, several Turkish economists said the rate cut was a grave error that would likely sink Turks deeper into economic distress ahead of elections that must be held by mid-2023.

“The sense of gloom, the exchange rate, is exposing that economic governance is in shambles,” said Refet Gurkaynak, chair of Bilkent University’s economics department, in Ankara.

Yet Erdogan – sliding in opinion polls – had grown impatient for a rate cut after installing a new central bank chief earlier this year, and he was surprised that inflation had marched higher, two Turkish officials said.

Still, one official close to the presidency said the rate cut was worth it despite the risks and inevitable criticism.

“This decision was necessary to increase exports, to generate employment and to open the way for new investments,” the person said, requesting anonymity. “There may be negative effects, but it had to be taken … to achieve these benefits.”

Erdogan, a self-described enemy of interest rates, said on Friday that inflation will drop to single digits, but he did not address the interest rate cut.

His government has blamed supermarkets for unfair practices, while on Sunday Erdogan promised to open 1,000 new markets across the country to provide “suitable” prices for goods.

The central bank said easing was needed since inflation is temporary and a core measure had dipped, and also since lending suffered after six months of the policy rate being held at 19% – among the highest in the world.

All this, combined with companies’ high foreign debt, means that exports benefit little from rate cuts, while private banks would rather shrink than expand credit again, said Gurkaynak, a former U.S. Federal Reserve Board economist.

“If the policy change is based on the belief it will help economic activity, there are false assumptions,” he said.

Selva Demiralp, director of the Koc University-TUSIAD Economic Research Forum, said Turkey’s “trial and error” policy is reckless given the Fed and other major central banks are moving to tighten policy to head off inflation, including the recent energy-price shock.

“The rest of the world correctly analysed the Fed’s guidance … but this decision will cause large damage to Turkey’s economy,” she said.

Past Fed policy tightening cycles have pulled funds from Turkey and other emerging market economies.

After a currency crisis in 2018 and smaller selloffs, the lira has shed two-thirds of its value in five years, eating into the earnings of Turks who have also faced double-digit inflation for most of that period.

This has alarmed Erdogan, whose conservative AK Party has ruled for 19 years on a reputation of strong economic growth and household wealth.

But that reputation has somewhat rusted https://www.reuters.com/world/middle-east/when-erdogans-turkish-economic-miracle-began-failing-2021-07-15.

Polls show the party has 31%-33% support, down from 42.6% in 2018 elections. Its nationalist ally the MHP has also slipped, suggesting Erdogan would lose control of parliament in a vote.

Erdogan looms large over the central bank after firing its last three governors over policy differences. He turned up the heat in June when he said he spoke to Sahap Kavcioglu, the current chief, about the need for a rate cut after August.

Even as inflation jumped to 19.25% in August, Kavcioglu began giving dovish signals on Sept. 1 investor calls, Reuters reported, citing participants. He reinforced that in a speech on Sept. 8 that, according to a separate source, the bank hastily decided should be made public only the night before.

Another official with knowledge of the matter said Erdogan was told that a cut could come in July or August. When it didn’t, “the president continued to have a serious expectation that rates should be lowered,” the person said.

Erinc Yeldan, acting dean of Bilkent’s economics faculty, said the AK Party is attempting to build a new economic growth story “whatever the cost” ahead of elections.

“It is clear that the result of these efforts will be even stronger instability and a deepening forex crisis,” he said. 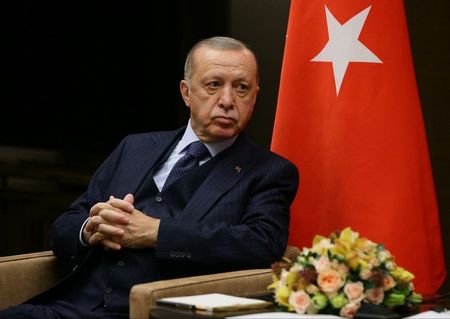 U.S. committed to WTO and wants it to succeed, trade rep...