(Reuters) -American Eagle Outfitters Inc said on Tuesday its inventory levels jumped ahead of the holiday season as it spent more on air freight to overcome supply-chain disruptions, after posting better-than-expected quarterly results.

Shoppers have been splurging on streetwear, visiting stores more after vaccinations and the easing of COVID-19 curbs. But congested ports and factory closures in Asia have resulted in nearly empty shelves for some retailers.

Shares in Abercrombie fell about 17%, tracking their worst day in 2-1/2 years, while those of American Eagle rose 5%.

Abercrombie is expected to take a hit of around $75 million in the fourth quarter due to higher freight rates, Chief Finance Officer Scott Lipesky said on a post-earnings call.

American Eagle forecast additional holiday-quarter freight costs of $70 million to $80 million. The company, however, has been beefing up its logistics game, after it agreed this month to buy Quiet Logistics for $350 million, following its takeover of AirTerra earlier this year.

Most other U.S. apparel sellers have reported an increase in inventory levels as they chartered their own container ships and ordered products in advance for the holidays.

American Eagle said its inventory at the end of the third quarter increased 32% to $740 million. “We are in a healthy inventory position … set up for a very strong holiday,” Chief Operating Officer Michael Rempell told analysts.

For American Eagle, third-quarter net revenue increased 24% to $1.27 billion, beating estimates of $1.23 billion, according to Refinitiv IBES. Helped by demand for its eponymous and Aerie brands, it also beat profit estimates. 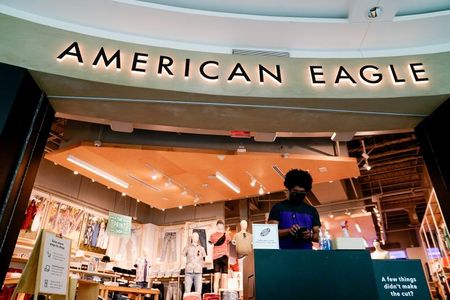