(Reuters) -Shares of AMC Entertainment Holdings Inc and other “meme stocks” jumped on Monday, extending a rally in social-media favorites into a third week as message boards hummed with talk of squeezing Wall Street short-sellers.

The sharp gains prompted the U.S. Securities and Exchange Commission to say it was looking into signs of market manipulation given the “volatility in certain stocks.”

The volatility has challenged analysts, and two of them in the past week have stopped covering video game retailer GameStop, whose shares soared in January in a retail-driven rally.

Cinema operator AMC jumped almost 15%, putting its gain over the past five sessions at 111%. BlackBerry’s U.S. listing surged 14% and is now up 57% since the start of June.

“AMC never ceases to amaze me. Just when I think that train is over, it jumps almost 10 points in the first 30 min of trading,” one poster on Reddit wrote.

AMC shares are up about 2,500% in 2021 as the company has courted individual investors, while GameStop has surged over 1,300% year to date.

Some bearish investors retreated from bets against AMC on Friday. Short interest slumped to 74.5 million shares, or 14.9% of AMC’s float, from 88.2 million on Thursday, according to S3 Partners.

Clover Health Investments, which has been the target of short sellers, was one of the most mentioned stocks on Reddit’s wallstreetbets on Monday, with some users suggesting the shares as the forum’s next short-squeeze target.

The insurer’s shares soared 32% in their highest volume trading day since April 19.

Institutional investors are largely sitting on the sidelines as the meme-stock rally continues.

Amateur investors, however, “don’t need a reason,” said Michael O’Rourke, chief market strategist at JonesTrading in Stamford, Connecticut. “They’re trying to do the same thing they did last week. It’s a new week. They start over, the meme stock buyers, the wallstreetbets Reddit community.”

Despite the retail-investor driven rally, Wall Street analysts have largely refused to raise target prices, which reflect their view of fair value for a company’s shares.

“We’re focusing on other areas,” he said. “It’s hard to justify where the stock is trading relative to the fundamentals.”

With GameStop set to report its quarterly results on Wednesday, the same day it holds its annual shareholders meeting, options prices imply a potential 24% swing for the stock in either direction by the end of the week, according to data from Refinitiv.

AMC has been the top-traded stock among clients of brokerages Fidelity and Freetrade, used heavily by individual investors managing their own money, data showed.

BlackBerry topped the list of stocks mentioned on wallstreetbets on Monday, according to the swaggystocks.com sentiment tracker.

The SEC continues to “monitor the market in light of the ongoing volatility in certain stocks to determine if there have been any disruptions of the market, manipulative trading, or other misconduct,” an SEC spokesperson said in a statement on Monday.

“In addition, we will act to protect retail investors if violations of federal securities laws are found,” the SEC said.

Market participants have told Reuters that some institutional investors are ramping up options trades that let them bet the shares will fall while keeping a lid on potential losses if they gain.

AMC’s corporate debt has benefited from the rally in its stock, though not to the same extent, in part because corporate debt is less accessible to retail investors. Its June 2026 12% bond, worth about $1.5 billion, is up over 360% since Jan. 1, tame compared to the stock’s gain.

“Bond holders are suspect of the volatile swings in the equity and where the real valuation is,” said John McClain, high yield portfolio manager at Diamond Hill Capital Management. “Do you really want to be the investor who buys AMC debt and watches the equity come back to reality?” 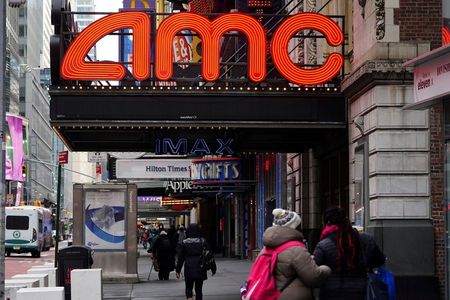 Putin meeting with Italy business elite to go ahead despite Ukraine

Travel curbs are biggest challenge for British firms in China –...