(Reuters) -Shares of AMC Entertainment soared on Thursday, notching a 35% one-day gain in a rally that burned bearish investors and sparked jubilation among the stock’s online supporters.

The movie theater chain’s market value ended the session at $11.9 billion as its shares closed at $26.52, with the highest trading volume of any stock on U.S. exchanges on the day. The shares are now up 1,150% year-to-date after hitting their highest level in four years.

Market watchers have attributed the moves in AMC – as well as in shares of GameStop which also rallied this week – to a range of factors, including the enthusiasm of retail investors congregating on sites such as Reddit’s WallStreetBets and the unwinding of bearish bets against the companies’ shares.

“I’m continuously amazed by the things we are seeing,” said Michael Antonelli, market strategist at Baird, who does not have a view on where AMC’s stock will trade. “All of us are getting an education in what moves stocks and that education is ongoing.”

About 91 million shares, or roughly 20% of AMC’s float are sold short, with bearish investors suffering just under $2 billion in mark-to-market losses year-to-date, according to data from S3 partners.

“One hundred percent, there were some short sellers with less conviction that closed out their short positions today,” said Ihor Dusaniwsky, S3’s managing director of predictive analytics.

A short squeeze took shares of GameStop on a more than 1,600% surge in January, though the stock pared those gains the following month. The video game retailer’s shares closed up 4.7% at $254.13 on Thursday.

FROM CRYPTO TO MEME

Investors shifting into so-called meme stocks from Bitcoin and other cryptocurrencies – whose prices have wobbled as they came under increased scrutiny from regulators – may also be driving the moves, analysts at Vanda Research said.

“Bitcoin’s decline has clearly flushed out some tourists, so some of that capital is probably being reallocated back into meme stocks,” Vanda’s Eric Liu said in an email.

Investors may have also been encouraged by AMC’s earnings report and conference call earlier this month, where it said the environment was looking increasingly favorable. [nL4N2MT4VQ]

“AMC’s earnings call probably also reawakened some animal spirits, and we saw a dramatic pick up in message board and social media activity in the name after the call,” Liu said.

AMC’s shares were up as much as 52% on Thursday and surpassed their Jan 27 high, posted during the rally in meme stocks earlier this year.

Some analysts covering the stock say they are optimistic business trends will improve for AMC as consumers become more confident about returning to movie theaters after their COVID-19 vaccinations and flock to summer releases.

However, at least one pointed to enthusiasm among retail investors as the main reason for Thursday’s gains.

“This is not driven by institutional demand… it’s not trading on fundamentals. It’s a meme,” said Wedbush Securities analyst Michael Pachter who has a $6.50 price target on the stock. “It’s just silly.”

On WallStreetBets, some users celebrated while others fretted over their recent purchases.

But another denizen of the forum, TalkingBackAgain, was less enthusiastic.

“I bought them at $29.25 and they tanked immediately. I lost 10% before I could exhale,” the user wrote. “Now I don’t know whether I’ll ever see that money back or whether this is the precursor to a $GME-style squeeze. I feel stress.” 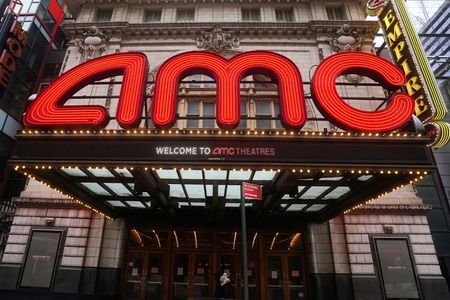 China Evergrande climbs as it plays down buildings demolition impact

Tesla under pressure to boost wages to attract workers to German...

Japan warns against volatility as yen slumps to 24-year low