BEIJING/SYDNEY (Reuters) – Air China and China Southern Airlines on Friday narrowed losses in the second quarter after a hit from low Lunar New Year traffic, but domestic COVID-19 outbreaks and border closures are set to weigh on the rest of the year.

Chinese airline stocks had tumbled following domestic COVID-19 outbreaks in late July that locked down some cities and closed airports, but rebounded recently as China has nearly halted local spread.

On Thursday, the city of Nanjing, locked down since late July, resumed commercial flights. Zhangjiajie, a popular tourist destination, will also reopen its airport on Aug. 30, an airport official told Reuters.

Third-quarter results will take a hit from the flight cuts, though they were less severe than in the first quarter when outbreaks restricted travel during the normally peak Lunar New Year holiday.

China Southern Airlines trimmed its loss to 682 million yuan from 4.0 billion yuan in the first quarter for first-half total shortfall of a 4.7 billion yuan.

Second-half earnings are expected to receive a boost from the pent-up domestic travel demand during the Mid-Autumn Festival and the week-long National Holiday in the fourth quarter, as health experts expect current outbreaks in China to be contained by end-August.

Unlike in most markets, China’s domestic capacity has rebounded past pre-COVID levels and airlines have added widebody planes on some local flights because international borders remain closed.

Zhong Nanshan, a coronavirus expert who helped shape China’s COVID-19 response, told local media that vaccination rate in China is expected to reach 80% by the end of this year.

However, despite the higher vaccination rate, hopes for the reopening of Chinese borders have been delayed as Beijing pushes ahead with its “zero-tolerance” approach while other countries are learning to live with COVID.

“Less than 1% of all seats in the Chinese market are allocated to international services; that must change for any recovery to begin,” OAG analyst John Grant said in a weekly online update.

(Reporting by Stella Qiu in Beijing and Jamie Freed in Sydney; Editing by Tomasz Janowski) 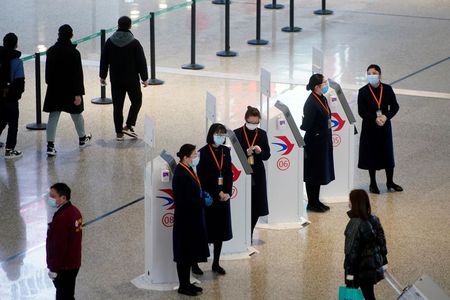 Fed’s rate cut pulls the DOW down by 800 points