MEXICO CITY (Reuters) – Shares in Mexican carrier Grupo Aeromexico rose by more than 3% in early trading on Monday after the company said it had presented a restructuring plan to debtors as part of its Chapter 11 bankruptcy process in the United States.

Shares of Aeromexico, which in June last year filed for court protection while it reaches an agreement with its creditors, were up 3.24% to 5.73 pesos, on track to post their fourth straight day of gains.

The airline did not give details of the plan in a statement issued late on Friday evening, but said it expects a hearing for approval to take place around October 21. 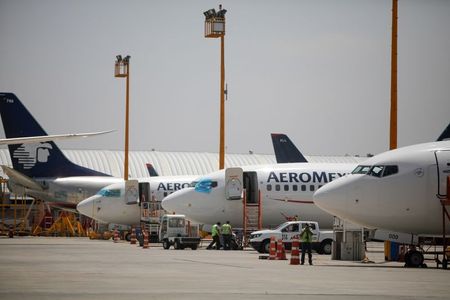 Teslas can now be bought for bitcoin, Elon Musk says

TikTok owner ByteDance in fundraising talks that will value it at $180 billion: sources

Amid tensions with China, India warns Amazon, Flipkart over country of origin rule

(Reuters) -Logitech International SA reported on Tuesday an increase in...