STOCKHOLM (Reuters) -Swedish truck maker AB Volvo reported a surprise rise in first-quarter core earnings on Friday, as it juggled strong market demand with a strained supply chain that has limited its capacity to keep up with orders.

The rival of Germany’s Daimler Truck and Traton also said it expected supplies of components to stay unstable with more disruptions and stoppages of production expected to hamper its business.

Heavy-duty truck makers have been grappling with global shortages of components, such as semiconductors, and a lack of freight capacity since market demand began to recover from the initial pandemic shock.

Russia’s invasion of Ukraine, which Moscow calls a special military operation, has further clouded the outlook for supply chains and diesel fuels, and seen Western manufacturers such as Volvo cut production and sales in Russia.

Volvo’s adjusted operating profit rose to 12.68 billion Swedish crowns ($1.33 billion) from 11.82 billion a year ago, well ahead of the 10.55 billion seen by analysts in a Refinitiv poll.

The results excluded a previously announced provision related to the war in Ukraine.

Shares in the Gothenburg-based company, one of Sweden’s biggest employers, rose 1.1% by 0708 GMT, to leave the stock down just over 20% so far this year, mirroring broad declines for industrial blue chips.

“Despite limited visibility in the supply chain and semi-conductor shortages still impacting the industry … we expect consensus expectations to move higher on better than expected performance of the truck division,” equities analysts at JP Morgan wrote in a research note.

Volvo Chief Executive Martin Lundstedt said: “We have had extra costs due to the supply chain disruptions as well as higher costs for material and have worked proactively with price management to mitigate them,”

“We expect that the inflationary pressure will continue.”

With many input costs rising rapidly, Volvo has also sought to maintain flexibility on its own pricing, leaving it loath to take on orders with delivery too far into the future.

Adding to frustrations over the supply chain problems, which forced vehicle makers to limit output in the quarter, demand for trucks has been strong across most major markets, with the result that they have been hit with both higher costs and missed sales.

“We have large order books and delivery times are long, and this has made us restrictive with order slotting, which affected order intake negatively,” Lundstedt said in a statement.

“We are doing everything we can to reduce the long lead times to our customers.”

Hobbled by the supply constraints, Volvo said order bookings of its trucks, sold under brands such as Mack and Renault as well as its own name, tumbled 47% year-on-year in the first quarter, while it kept unchanged forecasts for the European and North American truck markets. 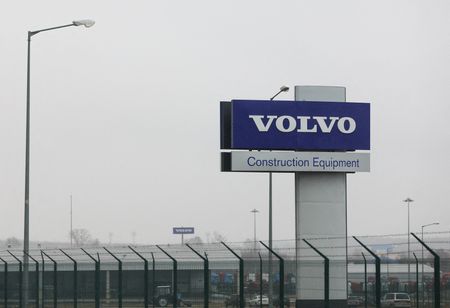