BOAO, China (Reuters) -A prolonged slowdown in China would have substantial global spillovers, IMF Managing Director Kristalina Georgieva said on Thursday, but added that Beijing has room to adjust policy to provide support.

The International Monetary Fund on Tuesday cut its growth forecast for China this year to 4.4%, well below Beijing’s target of around 5.5%, on the risks of widespread COVID-19 lockdowns and supply chain disruptions.

In a video speech to the annual Boao Forum for Asia, Georgieva said China’s actions to counter its economic slowdown are vital for the global recovery.

At the same venue, China’s President Xi Jinping said China’s economy is resilient and that its long-term trend had not changed.

In light of growing headwinds, foreign brokerages have also been slashing GDP forecasts for China, after weakness in March activity data raised outlook risks as the lockdown in the mega city of Shanghai drags on.

Barclays on Tuesday cut their already below-consensus forecast to 4.3%, from 4.5% previously, while BofA downgraded their forecast for this year to 4.2%, from 4.8% before.

Nomura on Thursday revised their forecast to 3.9% this year, from 4.3% previously, and second-quarter growth is expected to expand by a meagre 1.8%, according to their baseline estimates.

“What we see in China is that consumption is falling short, it is not recovering as strongly as necessary,” Georgieva told a news conference at the IMF and World Bank spring meetings on Wednesday. “So rather than moving money into public investments, move it into the pockets of people, so there is more dynamism coming from a consumption boom.”

China’s commerce ministry said on Thursday it would roll out targeted measures to boost a recovery in consumption. Spending has been hit hard by lockdowns across the country that began last month to contain the spread of COVID-19.

Final consumption accounted for 69.4% of China’s GDP growth in the first quarter, according to official data. 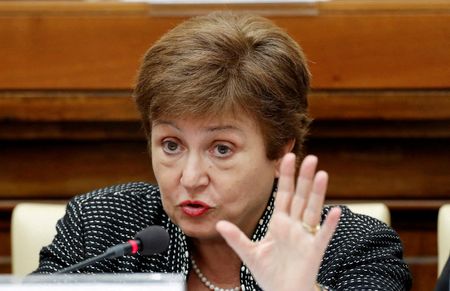