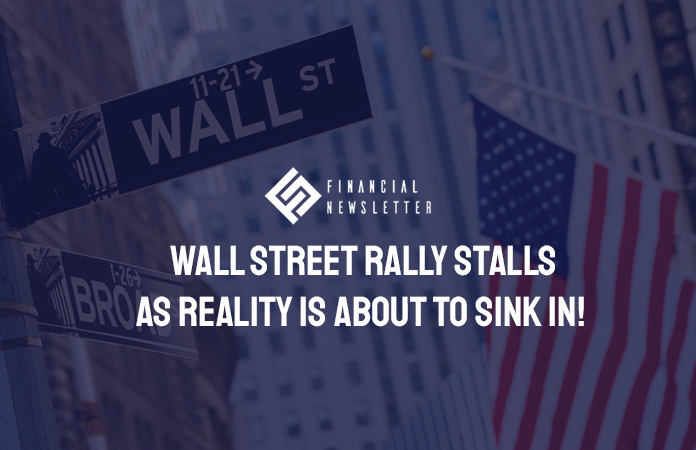 On Friday, stocks opened lower and failed to gain throughout the day and this brings to an end the 30day rally that the DOW and S&P 500 had been enjoying. Historically speaking, this was one of the best weeks for the indices since the 1930s. At a point in the day, the DOW lost as much as 1000 points and however, it gained back some of the losses before the market closed for the day. By the end of the day, DOW slipped 900 points even after the Senate sanctioned the $2 trillion bill.

Wall Fargo Strategist Scott Wren said during the closing hours of the market on Friday that though there is some gain in the indices due to the boost from the senate, a lot more will be required in the coming days. Central banks would need to intervene further to ensure that the Coronavirus economic crisis is over in the market.

The DOW dropped 4% or 915 points to end another volatile week of Wall Street. On the other hand, the S&P 500 registered a 3.3% drop while the tech-heavy Nasdaq Composite Index took a slump of 3.8%. However, strong performance in the previous 3 days didn’t allow the drop to harm as much as it could have if there were no gains in the previous sessions. To end the week, DOW had a gain of 13% while the S&P 500 jumped a total of 10%.

The house passed the $2 trillion package on Friday finally and the bill has been sent to Trump for further signature ad processing. Trump has promised to get it done immediately and hopefully, the market will rebound once again with this stimulus package in action. Some of the losses in the day were cut short as soon as the bill was passed but eventually, stocks finished in negatives when the closing bell rang.

As America faces a lockdown, people are worried about the stocks in the department stores. Analysts say that they have enough liquidity in the supply chain to offer people essential goods for the next 5-8 months on the trot! This offers a sigh of relief to the customers that they will be able to survive this period of national emergency without any shortage of food and essential supplies.

By Makiko Yamazaki and Maki Shiraki ...

Twilio nears deal to invest up to $750 million in Syniverse: WSJ

AstraZeneca has sold its stake in Moderna for more than $1 billion: The Times

Factbox: What a second Trump term would mean for U.S. financial...